We have designed a range of filters for any taste, from corner to over bettors. Use them to increase the chance of spotting value bets or just filter matches based on personal preferences to ease the in-play betting process. Read below about the filters that are on the site and get to know their functionality to make most of them.

Filters on the Match Page

In-play alerts have an important role during live football matches in betting nowadays. Every profitable football bettor knows it. Users of the BetBallers platform can create custom notifications based on live stats such as dangerous attacks, total shots, corners, cards, odds, and more. Notifications will increase the chance of finding suitable bets based on your preferences. This is especially useful when the alert is cross-referenced with the data in previous games, H2H, team info, and comparison (mutual opponents) tabs.

Before you begin with notifications, please be aware that Push Notifications have to be allowed on the Google Chrome browser. You will also need to decide whether to allow notifications when installing the app. This way notifications can be received on either iOS or Android devices.

Next, let’s take a closer look at the two examples below on how to create your in-play betting strategies.

The first notification detects home underdog based on the following criteria: 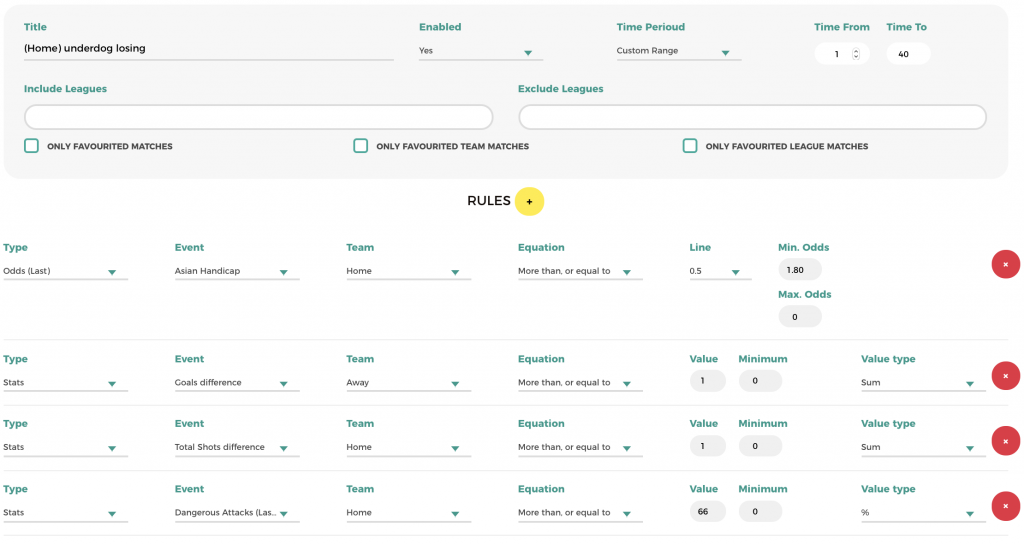 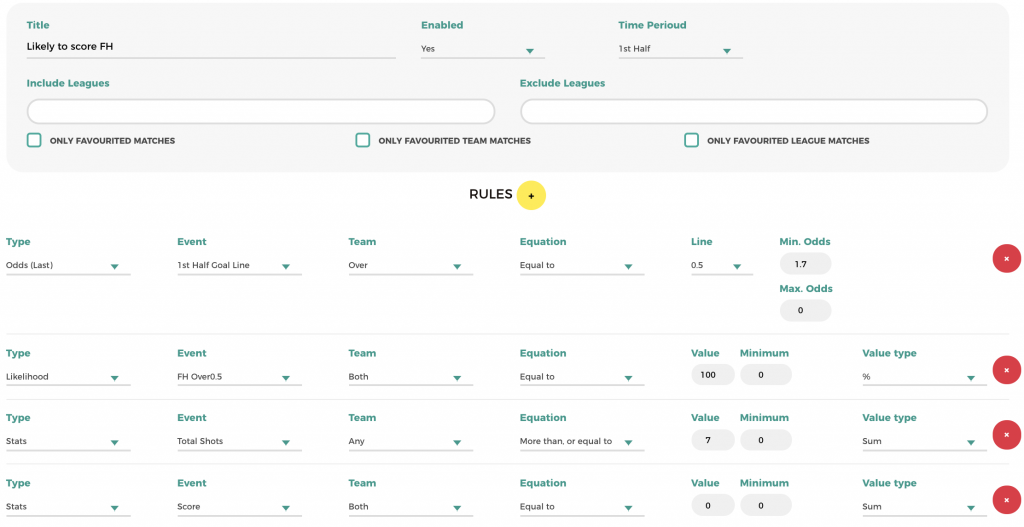 We have built a filter (take a look at the image below) to track the results of notifications. You can filter results by date, type/name, league,  half-time or full-time stats, as well as the following markets: (1st-half) Asian Handicap, (1st-half) Goal-line, (1st-half) Asian Corners.
Each stats column shows two numbers: stats of the moment when the notification was sent out; the number underneath shows either the final stats at half-time or full-time.
The result of the notification based on an active market and line is visible before each row on the left side. For instance, on the picture below all the results are calculated based on the 1st-half Goal-Line (Over).

The meanings of colours:

The variance stats show an average difference from the starting handicap line. It gives you an idea of whether a team is over/undervalued and shows which league/teams the market has priced most inaccurately in the past.
The calculation is:  [Team’s score difference] -/+ [Team’s starting line]; always using the absolute value.

Here is an example of Asian Handicap error stats based on four games:

Here is an example of Goal-line error stats based on four games:

The lower the number is, the more accurate the work the bookmakers have done with pricing games. We recommend taking a look at teams with a greater number as these teams have been harder to price for bookies and have more potential value. The same model applies to the Goal Line and Asian Corners market.

We have listed teams with the greatest average difference from the opening line (Asian Handicap & Goal Line & Asian Corners) on the Statistics page, as well as on every league page, for instance, England Championships.

The purpose of statistics is to help identify outcomes that have happened on a highly regular or infrequent basis and to determine potential value bets.

The numbers represent the % of times an event has happened thus far based on the previous results. For instance, FH Over 0.5 80%[8]. The small green number indicates the number of games these stats are based on. In the given case, the home side stats are based on the last 10 games, and 80% means that 8 times out of 10, they have either scored or conceded at least one goal in the first half. The away team, on the other hand, has scored or conceded at least one goal in all of the last 10 games. The number underneath (90%) these two is the average of both.

If these stats are very high or low, then this means it has happened on a very regular basis, and the likelihood is that there’s an increased probability it will happen again.

It is never suggested to just blindly choose the highest percentages and create a “once in a lifetime” accumulator based on it. It is essential to conduct additional research using the team statistics, for example, and checking the current form, league, injuries, H2H, and so on. For instance, average stats of FH Over 0.5 goals can be 90%, but it could be that both sides have conceded in most of the games, and scored a few times only. It is advisable to avoid such games.

One thing that is recommended to use is the likelihood scanner on either the In-Play or Schedule page to filter the list of games by likelihood stats. This way, you can spot the potential value bets quickly.

Additionally, these stats can be used for creating custom notifications. Choose the Likelihood option from the Type dropdown, and then set the Event value, as well as any other values. Add more rules that are based on Odds and Stats to create powerful and instant in-play or pre-game alerts.